A friend lent this to me. I have been interested in Flannery O’Connor. I have always  struggled with journaling and am trying to find a way to journal that is more doable, more profitable, and more satisfying both now and as I look back. So I have loaded my bookshelves with published journals by some of the greats. This was my first one to read. Like I said, I did’t know Flannery yet- this was our introduction. I had heard so much about this book, as well as her other stories, so truly they have had profound effects on people. But it did not leave a lasting impression with me. I wonder if this was not the place to begin with her. Who immediately jumps into your personal diary upon first meeting, anyway?? Had she been somewhat familiar, I may have read her words differently. I got stuck in the simplicity, and truthfully, the Catholicism. There was also an undercurrent of self-deprecation that didn’t seem helpful. (Compare to John Steinbeck’s use of, what I would call, productive modesty.) The last entry, though it spoke so truthfully, left me extremely disheartened. However, I am not done with her. I plan to read some of her short stories and see if that adds some perspective to her words. I’ll let you know if it does!

My husband and I listened to this at the urging of a good friend as we drove to Colorado this summer. I was really interested in the topic: the cultural development of unending adolescence. I was nervous it would be too political- I don’t have the patience for that. What I was not expecting was the history and philosophy that would be entwined throughout the book. Had I been reading it and not listening to the audiobook, had I not been listening to Ben’s own voice, I could have forgotten he was a senator. He wrote as a historian, as a Christian parent, as a former university president. Those were the perspectives he wrote from, and I found so much of what he had to say as valid and absolutely necessary. As we drove, this book was fuel for a lot of engaging- and sometimes robust- dialogue between me and Hubs in the car.

It’s greatest downfall (besides the hypothetical commencement speech by Theodore Roosevelt) was the practical application of his points. I loved hearing the stories of how his family was instilling work ethic and raising their kids to be full functioning citizens benefitting the world around them. But his situation is different from most, and a lot of what he said wasn’t transferable from his life to mine. My kids aren’t homeschooled. I can’t pull them from school for a few months to send them to a cattle ranch. My husband has a Monday – Friday job he has to be at. We don’t live it multiple locations nor do we have the opportunity to do most of the things his family has the opportunity to do.

So it was one of those books that sets you ablaze, winding you up so that you can spring into action, but once you close the back cover and start thinking about how you are going to shake things up…a bit of frustration and disappointment sets in. Ben, we are working on it. Already, we are doing things differently and our kids are responding, and we are thrilled. And we will keep working on it- you gave us the holistic picture we needed, both of the grim result if we don’t, and the thriving end if we do.

I wanted to like this because people I love and admire really liked it. Maybe I went into it with too high expectations. It was sharp and funny, but I had a love/hate relationship with Bernadette. I liked her, but she was selfish, and her selfishness was devastating to others, but it read like you were supposed to forgive her for that because it was just her mysterious way. I couldn’t. I saw in her my tendency toward selfishness and the devastation that can have on those around me and I was angry with her, with me. Her excuses were not good enough. (No, neither are mine.) It was an entertaining read, but I hoped for much more at the conclusion. 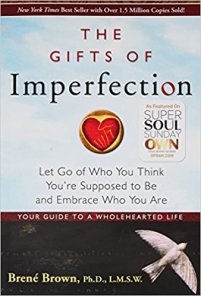 No one wants to talk about shame, but it is universally experienced. This book surprised me. I have a tendency to hate self-help books. I went into it both curious and dreading what I would read. The women in my Bible study group read it during the summer break. For me, as for most of us, it took some semantic maneuvering. All in all, it gets at the heart of some really true things. I can’t get behind all of it, but what did resonate with me gave me a lot to think about. And God- with his sovereign humor- gave me some experiences to practically apply some of what I read, on the golf course no less, so thanks for that.

Now here is a book! This memoir shocked the hell out of me, despite hearing from several people years ago that it needed to be read. I finally did it so I can go see the movie- currently in theaters. Two things shocked me: it should have been heartbreaking, and I should have hated her parents. What could have been agonizing to read simply wasn’t. Let me give you an example- sandwiched in between talk of scorpions and Gila monsters and cats is this:

A month after we moved to Midland, Juju got bitten by a rattlesnake and died. We buried him near the Joshua tree. It was practically the only time I ever saw Brian cry. But we had plenty of cats to keep us company.

Lest you think Juju is one of the cats, it is her little brother. And here’s the surprise- despite the matter-of-fact way she presents horrific things in this book, the reader still feels the full effect of what has happened. I got to the end of that sentence above, and though it was in the middle of a paragraph, I stopped dead in my tracks and wept with Brian. And I wept all the more for the lack of tears in the story. Maybe she had to do it this way- I’m not sure I could have endured if she had not. Maybe she couldn’t have either.

The same was the case with her parents. She was gracious. She shared the awful, but she shared the beautiful too. She had come to a point of accepting all that they were, neither good nor terrible only, but a mixture of both. Despite my vigorous efforts, I enjoyed her dad. I went back and forth between anger and wonder with him….just as she did.

It is an incredible story incredibly shared.

I lost you as a game of chess
waged on a battlefield
square patches of dark and light.
In the end they blurred to gray mist.
Oh chess, my downfall!
Where any game safely played
is never won.
You, my Queen,
I surrounded with pawns
unwilling to test our limitations.
I didn’t want to know them.

You would not be risked,
not even for victory.
Never underestimate the comfort
of untried possibility.

But now, having lost so
slowly, so
inevitably
I have come to think it would have been better
losing you in a sudden stab at glory!