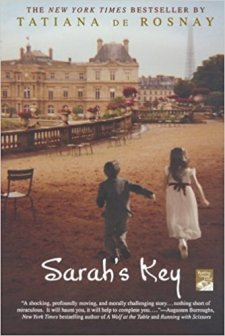 As many of you know, WWII historical fiction is right up my alley. A majority of my “Want to Read” fiction on Goodreads consists of WWII fiction. I even have a book in my mind that I will write someday. So I went into this thinking it would be a layup.

It starts with two stories: the 1942 story of the Vel’ d’Hiv roundup of Jews by the French police. It is the story of one ten-year-old girl and her family and their tragic separation. The second is a modern-day journalist studying the Vel’ d’Hiv roundup (nearing it’s 60th anniversary) and finding her own link to the history there. The chapters go back and forth between these two stories.

The 1942 story is wonderful. It draws you in and you picture what is happening in your mind; you put yourself there. You do it despite the writing. The 1942 story is told from the third person: The girl did this, the girl thought that, etc. It detaches the reader from the story, but despite this, you enter in.

The modern-day story of the journalist, however, is told in the first person. Yet I found myself struggling to relate to her. I didn’t understand her. I didn’t really even like her that much, though she gave me little to like or dislike. She, and her story, was bland. About half way through the book the 1942 story ends, and the rest of the book is the modern day story, which by now has intertwined with the story of the past. I remember getting to that first chapter that didn’t take me back to 1942, back to the little girl- my heart sank. That was the story the reader wants to hear.

In literature, there is story, and there is beautiful writing, and a handful of times, you find a gem that combines the two. This one absolutely leans toward story- there is nothing beautiful in the prose. It doesn’t read like music, it isn’t moving, it doesn’t create a scene you are entranced with. It is plain and tells a story. This is ok when the story is fantastic. This story could have been fantastic. But in the end, it wasn’t. Rosnay had a great beginning in her mind, one with amazing potential. But in the making of it, too much was lost. I wish she had stuck with the 1942 story and seen it through to the end. I wish she had made that the only story, the first-person account. It could have been….so much more.

(If you, like me, love WWII fiction, I recommend instead reading The Guernsey Literary and Potato Peel Pie Society.)